After much procrastination, I’m pleased to finally be posting the first installment of our mix series, Slide. Mixtapes have been an obsession of mine for about as long as I can remember. I have this ongoing fascination with the way we interpret various media… how no two individuals have the exact same take on a particular project and how these unique relationships influence our sense of involvement.

With a well considered mixtape, tracks can be placed in certain contexts and you often end up hearing something familiar in a new light. There’s a lot to be gleaned about the person putting the mix together too, the variety of tracks and moods and the type of transitions between them all say something about that individuals relationship with the ideas they’re using.

So the concept is simple, I’ve got together a pile of mixes from friends and associates and with their permission I’ll be posting them at intervals here on the blog via soundcloud. Over time we should rack up an interesting archive from the past present and future. Enough introductory rambling now, on to the first installment… 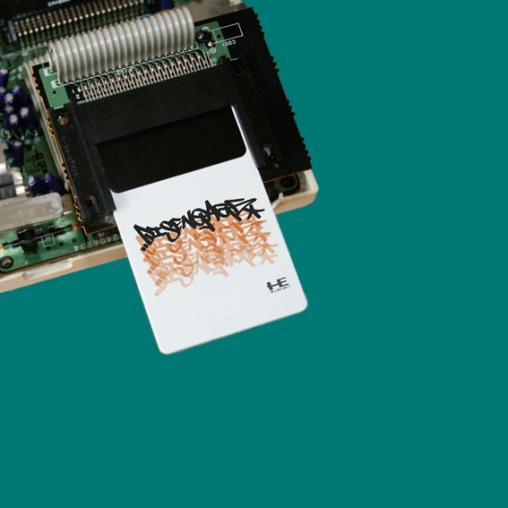 I’m starting the series with a mix of my own from 2003 which may seem a little self indulgent though there is a specific reason for it too. Multilink wasn’t originally conceived as a magazine, it basically started life as a desire to get involved with creative people and projects of as wide a variety as possible. We stumbled into the idea of a pdf mag after Steve showed me Bloodwars and it seemed like something that between us we could get moving pretty quickly, so that’s what we did. With no experience of any conventional magazine editorial process, my plan was to approach the first issue as a mixtape only made with people and projects as opposed to 12″s and LPs and that’s basically what I’ve stuck with for all subsequent issues since.

The significance of starting our series with the Disengage mix is that it was planned and recorded during the same period Steve and I put together issue #01 of multilink. So as different as the end formats may be, I’ve always felt they shared a similar process in regards to selection and assembly.

I plan to avoid describing the content of each mix, opting instead for a little background info each time. However, if you do require serving suggestions then this one is probably well suited to long journeys or extended sessions of lazy leisure.

Download the mp3 via the arrow on the Soundcloud player. Larger front/back artwork and track listing can be downloaded here.